It can seem counterintuitive to bring Esports curriculum into schools. After all, aren’t we supposed to be steering our kids away from the screen? But you would be surprised about the amazing benefits of combining Esports and education. Yes, video games are no longer only meant to be played with your friends for fun. Now, you can compete against people around the world!

Esports has rapidly grown to be a multimillion-dollar industry, millions of fans globally follow eSports matches both in-person and online. In fact, 27 Million people watched the League of Legends Championship in 2017, which is more than the 18 million who watched the final game of the NBA Finals and the 23.5 million who watched game 7 of the world series!

So, what is Esports? Esports describes competitive, organized video gaming. Popular games in this sport include League of Legends, Overwatch, Fortnight, and Rocket League. The world is really starting to acknowledge just how diverse the competitive gaming industry is. It isn’t just about being good at games, players must be highly skilled and devote a lot of time to practice. Players need to establish their strategy and work with their teams and coaches to be successful. For some students participating in an Esports team provides an opportunity for a leadership role that they may not otherwise feel compelled to take on while at school.

There are many different roles for each student to make a successful Esports team, and not all of these roles are about playing video games. If you have ever seen an Esports competition, you may know that commenting is a large part of the event, and just like in traditional sports. And those who are commenting do not need to be elite level players, which helps broaden the scope of who can participate in an Esports team. There are also roles in production, social media and advertising, video editing, and marketing! Students who may not be excellent players themselves can still be involved in the team. 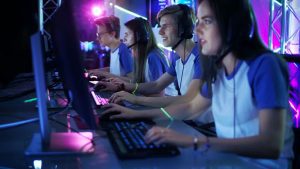 The benefits of being part of an Esports team are endless. Esports can be a valuable gateway into technology-related jobs such as robotics, graphic design, web design etc. Being a part of an Esports team while they are in school can also help students to discover their passion for a career in the tech industry! And students learn valuable transferable skills like cooperation and collaboration, strategic thinking, good sportsmanship, and digital citizenship that can help them in the 21st-century job market.

Many people express concern about Esports teams in schools due to the toxic environment on many online games. However, by creating an in-person environment like a school Esports team this can be resolved because there is real, in-person accountability for each student and their behaviour. When students play games at home, who is teaching them how to be safe while gaming? And is anyone teaching them what is appropriate? Often times, this is not the case. However, by bringing Esports into the school, we create space to teach students about how to exist appropriately in online environments and keep themselves safe.

Esports also creates an inclusive community for students who may not otherwise be able to participate in a traditional sports team at school. It is also a low cost extracurricular because many of these games, such as Fortnite are actually free to play, and there are no associated travel costs like there are with a traditional sports team. Everything can be done from a school computer! This means that Esports has the power to include students who, for various reasons, have been unable to be included in other types of extracurriculars. Not to mention, studies show that participation in extracurricular activities boosts student success, regardless of the activity!

By harnessing student interest in video games and Esports, we can provide powerful opportunities for students to develop and explore the skills needed for various STEM fields, and this is exactly what we are aiming to do at STEM MINDS with our new Esports program! This can also increase STEM interest among female students by harnessing something they may already be interested in, like gaming. Esports has the potential to captivate a hard to reach student and can harness this passion into a fulfilling STEM career! Esports are engaging, inclusive, and provide students with leadership opportunities and many valuable skills. So it is a no brainer for educators to start embracing Esports in their school!

Gifts for the Maker Dad in your Life